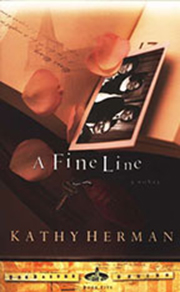 A FINE LINE
The Baxter Series #5

Baxter residents fear upheaval when a regional tire plant announces it’s coming to Baxter. Rumor has it that mayor Charlie Kirby’s signature on the deal was influenced by an affair with the tire company’s corporate attorney—who dies suddenly after the agreement is finalized. Charlie, a pillar of the community and a father of seven, faces the court of public opinion and the biggest moral dilemma of his life.

Meanwhile, newspaper editor Ellen Jones goes looking for a feature story, collides with the brick wall of the late attorney’s past—and is stalked by someone pursuing the same track!

A Fine Line brings together characters from previous books in a suspenseful and dramatic series finale.