A Shred of Evidence Excerpt 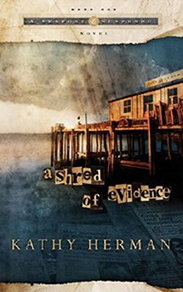 “The words of a gossip are like choice morsels;
they go down to a man’s inmost parts.” —Proverbs 18:8

Julie Hamilton dabbed her eyes, then dropped a limp Kleenex in the waste can and stared at her reflection in the bathroom mirror. At least the puffiness had smoothed out the stress lines around her eyes.

She cupped her hands under the faucet and splashed cool water on her cheeks, breathing slowly through her mouth until the residual sobs finally stopped.

The police had months ago exhausted their questioning of Ross. If only that reporter had been as merciful, perhaps they wouldn’t be moving to Seaport. Not that relocating was going to solve their problems. As long as Ross continued to hide behind a wall of silence, her daunting guilt would only scream louder.

Julie exhaled a sigh of desolation. What happened to the life she thought she had signed up for, the girlhood dream-come-true?

She heard Sarah Beth singing in the other room and knew which part of the DVD had come on. Her daughter had been watching the same one over and over for nearly two hours. Julie wondered how long it had been since she had held Sarah Beth’s attention for even half that long.

The phone rang. Julie didn’t answer it. “This is the Hamiltons’. Leave a message after the beep and we’ll call you back.”

“Julie, it’s Mother. Would you please pick up? I’m not going to stop calling till you talk to me.”

“I don’t want to talk to you,” Julie mumbled.

Julie marched into the bedroom and grabbed the receiver off the cradle. “What do you want, Mother?”

“I want you to stop avoiding me.”

“Don’t be so paranoid. I’m avoiding everyone.”

“You can’t keep doing this.”

“I’m thirty-five years old. If I feel a need to keep avoiding people, that’s my business.”

“It’s not healthy.”
“It’s a way to cope. Why can’t you understand that? Ross and I need space to deal with what’s happened. The media’s driving us crazy.”

“You don’t think your father and I are hurting?”

“Of course, you are. But you can’t possibly understand what this has done to us.”

“How can we when your husband won’t let us come visit?”

“Will you stop calling him that? Having you stay here is just too difficult right now.”

“I never would’ve believed my own daughter would think I’m a burden.”

“I never said you were a burden.” Julie exhaled loudly enough to make her point. “We need time to get over this. Ross can’t do it with a house full of people.”

“We’re family, not people. Let us take Sarah Beth for a couple of weeks. The break would do you good.”

“Are you kidding? The empty house would send Ross over the edge.”

“You think it’s fair to punish her just because your husband can’t cope with what he did?”

“Mother, stop it! I can’t deal with this right now. I love you, but I’m hanging up.” Click.

Julie sat hugging herself, her body trembling, and willed away the emotion, then got up and went into the bathroom.

She squeezed a small amount of foundation onto her index finger, applied it lightly to her face, and watched the red blotches disappear the way they always did. What good would it do for Ross to know that after an entire year, she still had bouts of uncontrollable weeping? He’d already suffered enough. They both had.

Julie Hamilton ambled down the front steps and picked up Monday and Tuesday’s newspapers, wondering if she dropped dead on the sidewalk if anyone would even notice. Except for a half-hearted wave from a shriveled man living next door, none of the neighbors had even acknowledged that her family had moved in. It wasn’t as though they could have missed the U-haul parked in the driveway.

A checker at the grocery store had told her that Seaport functions like several smaller towns within a town. He said that once she found her niche, she’d like it there.

And just how was she supposed to find her niche when she’d hardly spoken to an adult in days? Ross stayed conveniently busy at his Uncle Hank’s body shop and found more and more excuses to work late. Much of the time he didn’t make it home until just before Sarah Beth went down for the night. He always made time for his daughter, but would be snoring on the couch before Julie got the dinner dishes done.

She went out to the curb and opened the mailbox and found it empty. Like everything else in my life, she thought.

Julie looked up and saw two tiny bare feet and a smile the size of Texas. Sarah Beth toddled toward her giggling, arms outstretched, red curls setting off her clear blue eyes.

“You didn’t take a very long nap,” Julie said, scooping her daughter into her arms.

“I love you, too. But you need to sleep longer so you can stay up and see Daddy when he gets home.”

“Oh, all right.” How could she say no to those pleading eyes?

Julie carried her daughter inside and sat her in front of the TV, then slipped the “Toddler-Sing-Along” disc into the DVD player. The phone rang, and she hurried out to kitchen. “Hello.”

“What am I supposed to do about dinner?”

“Go ahead without me. I’ll microwave the leftovers when I get home.”

“How late will you be this time?”

“I don’t know. Eight. Maybe later. Uncle Hank bumped another job and made this one the priority. Spalding throws his weight around here-and his old man’s money. Hank wants to keep him happy.”

“Well, by all means, let’s keep everyone else happy.” Julie cringed at the sarcasm in her voice but decided to make no apology for it.

“Sorry. I’m the only one my uncle trusts to get this done right. Plus we need the extra money. I’ll be home in time to say goodnight to Sarah Beth.”

“And then you’ll crash in front of the TV and I’ll be left twiddling my thumbs. Moving here was supposed to help us reconnect, not push us further apart.”

Ross lowered his voice. “I can’t talk about this on the phone. I’ll see you when I see you. Bye.”

Love you, too, she thought.

Julie hung up the phone, then peeked around the corner and saw Sarah Beth in front of the TV, singing off key and happily swaying to the sing-along tunes.

Julie wiped a tear from her cheek. She’d always heard that time heals all wounds. Then why did hers still feel so fresh-and so incurable?

Ellen Jones popped a chocolate caramel into her mouth and typed as fast as the words came to her, then scrolled up the page and reread chapter eleven of her novel. She turned off her laptop, smiling with satisfaction, and threw a pile of empty candy wrappers in the trash.

She got up from her desk and looked outside, her eyes drinking in the calm, glimmering water of Seaport Beach. She heard the front door open, and then her husband’s voice calling her name. What was he doing home from Tallahassee on a Tuesday afternoon?

Ellen heard footsteps on the circular staircase that led to the third-story widow’s watch she had made into her workplace. She turned around just as he walked in the door.

“Surprise!” Guy Jones put his arms around her and lifted her off the floor.

“You’re home a day early, Counselor. Judging from your frivolous mood, I’m assuming all is well at McAllister, Norton, Riley, and Jones?”

Guy’s smile scrunched the crow’s feet around his eyes. “Indeed. Brent McAllister wants me to take on a toxic chemical case. He thought I might be more efficient working at home this week, so here I am. I know you’re busy, and I probably should’ve called so you could shift gears. But I wanted to surprise you.”

“Actually your timing is perfect.” Ellen straightened his tie and brushed a piece of lint off his sleek Italian suit. “So tell me about this big case.”

“Brinkmont Labs is being sued by residents of Marble River who claim the plant has polluted the river and is responsible for all kinds of health problems. Some aspiring young litigator is just out to make a name for himself. Documentation of samples taken from the river over the past seven years is in line with EPA standards. Should be a slam-dunk.”

Ellen brushed her hand through his hair and noticed a glint in his eyes she hadn’t seen since his law school days. “Good. It’s about time Brent let you show him what you can do.” She turned around in his arms, his chin resting on her shoulder, and looked out over water. “Oh, look, the skimmers are back-there, flying along the beach. See them?”

“Skimmers. They glide above the water and dip their bills in the water to feed. I read about them in my bird book.”

“So did you make any progress on your novel?”

“So when do I get to read it? Is it any good? Ellen, are you blushing? I was just kidding.”

“Yes, you are,” he said, pinching her cheek with his thumb and forefinger.

Ellen laughed in spite of herself. “I think it’s good, though getting a publisher to agree with me might prove to be an interesting challenge.”

“Thought of a title yet?”

“I haven’t gotten that far. I’m just relishing the joy of writing.”

“And I’m relishing being home,” Guy said. “Why don’t you change, and let me take you to dinner-some place with candles and soft music?”

“That’s awfully generous of you, Counselor, considering you’ve been eating out all week.”

“Yes, but Brent McAllister’s not exactly my idea of a dinner date.”

Ellen chuckled. “I thought you’d be ready to eat at home.”

“Honey, anytime I’m with you, I am home. Besides, you’ve been working, too. You shouldn’t have to cook just because I’m here.”

“I’ve been eating entirely too much sugar,” Ellen said. “I’m craving seafood. Why don’t we eat at The Sandpiper and watch the sunset?”

“Okay. Most of the snowbirds have left and I doubt it’s busy on a Tuesday night. I’ll try to reserve a table by the window. Why don’t you put on that sassy sundress-the one with the floral print? You can watch the sunset, and I’ll watch you.”

Ellen prodded him toward the door. “This partnership really agrees with you. I don’t know when I’ve seen you more lighthearted.”

“Get used to it, Madam Novelist. Things are just going to get better and better.”

Ellen listened to her husband’s descending footsteps and thought how happy she and Guy had been since the move to Seaport. It hadn’t been easy for her to walk away from a satisfying ten-year career as editor of the Baxter Daily News-or from the close-knit community she had grown up in. But watching Guy thriving as a partner in Brent McAllister’s law firm had been worth any sacrifice she had made. And now that she was writing a novel, she didn’t even mind Guy working out of his office in Tallahassee a few days a week.

She sauntered over to the doorway and turned around, her arms folded, and admired her workplace. Quaint. Uncluttered. The wood floor bore the scars of decades of foot traffic, and Ellen wondered who else had spent time up here.

A bank of windows formed a semi-circular alcove and provided abundant light. Sometimes she would lose herself in the beauty outside, always amazed when her thoughts came together and her fingers moved on the keyboard.

“Ellen? We have reservations in thirty minutes. Better hurry if you want to watch the sunset.”

She let her eyes flit around the room one more time, wondering how long it would take to finish her novel. She had spent fourteen months doing little else. But for now, it seemed enough.