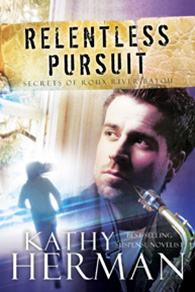 “Relentless Pursuit is the dramatic and magnificent conclusion to the Bayou series. Kathy Herman weaves a tale of surprises and suspense that stands well on its own, but draws subtly on the previous books in the series for those who have read them. Grace shines from that pages as the characters wrestle with the raw reality of living their faith. A triumphant story!”

“What if a handful of people in your town died from a blatant case of food and water poisoning? Mystery lovers won’t rest until they race to the final page of Kathy Herman’s latest yarn, Relentless Pursuit, which I know her fans will devour.”

—Creston Mapes, author of Nobody

“In a collision of heart and soul, Relentless Pursuit is a poignant portrayal of God’s passionate pursuit of us. With its gut-wrenching rendering of complicated family dynamics, heart-stopping suspense, and plain beautiful Louisiana charm, Relentless Pursuit is captivating. Kathy Herman has another winner on her hands.”

“Kathy Herman’s Relentless Pursuit is truly relentless. A seemingly random act of violence and murder against innocent people launches a rollercoaster of suspense. Characters we’ve come to care about are put to the test and plunged into danger. They are also pushed to the limit, which God’s love often requires. Don’t miss the finale of a great series!”

“Relentless Pursuit is indeed the theme of this powerful story of love and betrayal, guilt and remorse … and murder. Murder all the more terrifying to this small Cajun town because anyone, man, woman, or child, may be the victim of this ruthless killer’s pursuit for revenge. But there’s an even stronger pursuit here in God’s effort to bring even the most resistant and fallen of his beloved children to Him for eternity.”

—Lorena McCourtney, author of The Ivy Malone Mysteries and The Andi McConnell Mysteries