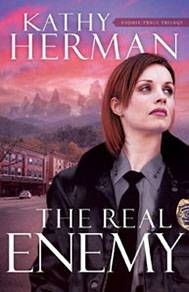 Brill Jessup becomes the first female police chief in Sophie Trace, Tennessee, and soon faces a series of bizarre disappearances that sends chills through the townspeople.

Brill’s investigation runs headlong into a nineteenth century legend that claims that the “red shadows,” the spirits of the Cherokee who were driven from the land, roam the countryside and wreak havoc on the descendants of those who settled there. Brill thinks it’s absurd but soon discovers that that people who grew up with the legend are convinced the authorities are withholding the truth. The media can’t get enough of the story, and panic sets in when new facts seem to support the legend.

Brill uses the case to avoid dealing with her husband Kurt’s affair. She’s never going to forgive him. So why can’t she just end it?

As the case heats up, so does Brill’s anger. Based on Romans 12:21, “Do not be overcome by evil, but overcome evil with good,” the real enemy may be closer than she thinks.