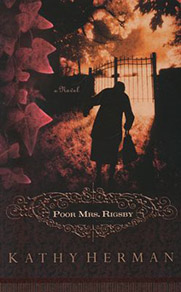 Sally Cox goes to work in a nursing home after her husband of thirty years leaves her for a younger woman—and in serious financial straits. The only thing bigger than the chip on Sally’s shoulder is her faltering faith—and her attachment to a ninety-year-old nursing home patient named Elsie Rigsby, who suffers from dementia and whose mind wanders in and out of reality.

Then Mrs. Rigsby tells Sally a startling secret: She has hidden a fortune in illegal money! She makes Sally promise not to tell her greedy son and grandson, but to get the money and give it to the poor. Sally, who’s on the verge of bankruptcy, struggles with whether to trust the God she’s angry with to supply her financial needs, or to keep the money for herself.

But Sally isn’t the only one Mrs. Rigsby has told about the money! And you won’t believe what happens next!

POOR MRS. RIGSBY explores the dangers of financial worry, the wages of greed–and the God who has promised to be a refuge from both.