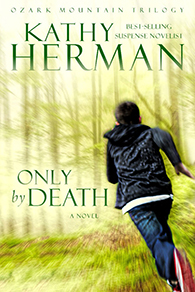 ONLY BY DEATH
Ozark Mountain Trilogy #2

Only by Death is the story of Liam Berne, a middle-aged man who loses everything in a nasty divorce, and moves in with his sister and his elderly mother, who suffers from Alzheimer’s. Liam loves his mother and hates seeing her walled off in a world of her own, her thoughts jumbled and confused. When his sister insists it’s time to move their mother into memory care, Liam resents that his inheritance will go to make the Alzheimer’s center richer, while the quality of his mother’s life plummets. After much agonizing, Liam does the unthinkable. He ends his mother’s life in a way that can’t be traced back to him.  But just when he thinks he’s home free, his perfect plan is threatened by a young eye witness he could never have anticipated—one who could ruin everything.

This thriller digs deep into the heart of both Liam and the boy—two opposite extremes evoking strong emotion—and causes us to consider how seriously we take our Christian walk. And to what degree we’re willing to die to our own desires in order to walk in obedience and faith.

Based on Romans 8:13: “For if you live according to the flesh, you will die; but if by the Spirit you put to death the misdeeds of the body, you will live,” this is fast-paced suspense that will appeal to both genders—adults and mature teens.