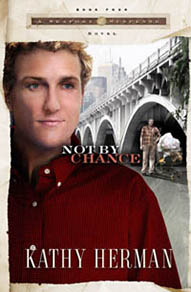 NOT BY CHANCE
Seaport Suspense Series #4

Life is pointless. And if there’s a God, He’s asleep on the job.

The words rang in Brandon Jones’s mind. He didn’t know what he expected from the homeless man he met on the way out of town. Certainly not angry words that haunted him.

But then, nothing was happening the way he expected. Not his promising career, not his engagement to the “perfect” woman. All his certainty that God had plans for him, that he was meant to do something important—something significant—amounted to a big fat zero. And now, here he was, thirty years old, no job, no fiancée, and no direction. Living with his parents. Maybe the homeless guy was right.

Then again…maybe not. Maybe Brandon has returned to Seaport for a reason. To face down a brewing disaster, steeped in hate crimes and danger. To survive against all odds. To learn, once and for all, that “many are the plans in a man’s heart, but it is the Lord’s purpose that prevails.”