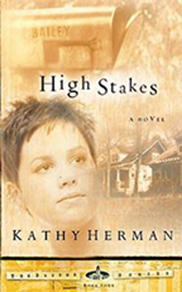 Billy Joe Sawyer lay on his back, his hands behind his head, his eyes staring at the ceiling. How many years had that brown watermark been up there? Who else had stared for hours at the same stain, bored out of his skull? How he loathed this place—almost as much as the deputy whose footsteps he heard echoing in the hallway. Billy Joe sat up when the deputy approached the cell door, shaking the keys.

“Well now, Billy Joe. You’ll never guess who’s here to see you: your mother’s first mistake. Gee, I guess that makes you her second.” The deputy laughed. “You’re the two sorriest losers I can think of. Come on. Let’s get this dog and pony show over with.”

Billy Joe didn’t say a word as they walked to the glassed-in room but fantasized, instead, about all the ways he could inflict pain on the man with the keys.

“Sit down,” the deputy said, sneering at Johnny Lee standing on the other side of the glass. “Well, now, there ya have it: Sawyer and Sawyer. Like going from bad to worse.”

Billy Joe watched his brother direct a mock kiss at the deputy, who shook his head in disgust and left the room.

Billy Joe snickered and picked up the phone. “How come you’re back? That’s twice this week.”

“Hel-lo?” Billy Joe waved his hand in front of the glass. “You on somethin’?”

“What’s wrong with you, Johnny Lee?”

“The prosecution has a string of witnesses ready to bring you down.”

“I’ll bet big brother can narrow down the field.”

Billy Joe’s gaze locked on to Johnny Lee’s. “Yeah? How?”

Billy Joe’s grin nearly swallowed the receiver. “What’re you up to?”

“Do they let you read the newspaper in this joint?”

“Sure. It’s the highlight of my boring existence—except for Ellen Jones’s editorials. That broad doesn’t cut me any slack.”

“Well, keep readin’ the paper, Billy Joe. It’s gonna get real entertainin’.” Johnny Lee laughed with his eyes and hung up the phone.

Angie Marks looked out the window of Tully Hollister’s blue Ford pickup and bemoaned the sagging gray sky that had followed her from Memphis. She was only vaguely aware of the driver’s incessant talking until the car in front of them hit a puddle and a gush of water flooded the windshield.

“At least it stopped rainin’,” Tully said. “Last I heard we got over four inches…you awake?”

Angie stared out the window. Like I could get a word in.

“Know anything about herpetology?” Tully asked.

Angie shook her head. “What is it?”

“The study of reptiles.”

“Guess I missed out on that one.” His boring babble annoyed her more than the wipers scraping the dry windshield.

“Yep. I pick ’em up with my bare hands. Take all kinds of chances.”

He looked at her as if waiting for a reaction. Angie avoided his eyes, wishing he’d keep them on the road.

“I caught a whole mess of rattlesnakes,” he said. “Picked up every one of ’em without gettin’ bit.”

“Now they’re in a gunnysack in my shed. Wanna know why?”

“Because they’re dangerous. I’m attracted to wild things.” He looked at her and grinned.

Was that supposed to be a pass? Angie cringed. “How much further is it?”

“Not far. Why didn’t you take the bus? Bet your folks wouldn’t like the idea of you hitchhikin’.”

“My connection didn’t leave till ten o’clock. I didn’t wanna get in after dark.”

“Lucky for you I came along when I did or you’d be soppin’ wet.”

“Yeah, I know. Thanks.” Angie sat as close as she could to the passenger door, glad that her backpack was between them.

“Where’d you say you were from?” Tully asked.

“Baxter isn’t exactly on the way to anything. You visitin’ relatives?”

“Nothin’ else to do there.”

“I followed the news story about the virus and the fire bombings last summer. Thought maybe I could meet the father who saved his twin sons.”

Angie nodded. “You know him?”

“Shoot, yes. Everybody knows Lawton. Rich outsider from Denver. Moved here to be closer to his boys. Finally married their mother last weekend.”

“Had some fancy schmancy weddin’ at that church downtown and then a big wing ding out at the country club. Everyone was talkin’ about it.”

“Did his family come for the wedding?” Angie asked.

“Beats me. His grandfather lives here now. Why you askin’?”

He grinned, his eyes seeming to probe. “What’re you after, girl?”

Angie looked out the window, glad to see the sun peeking out of the dark clouds. “People in Baxter seem real nice from what I saw on TV—different from the people I’m used to. Seems like a friendly town.”

“Yep, it’s friendly all right. But I gotta tell you, that silver thing on your nose and those tattoos aren’t gonna set well with folks around here.”

Angie pulled her jacket up over her shoulders.

“Whoa, a double rainbow!” Tully pointed out her window. “Must be a sign I’m gonna win at poker tonight. You know much about poker?”

Angie sighed and glanced at her watch. “Are we getting close?”

“There’s the courthouse,” Tully said. “See the clock tower sticking up through those trees?”

Angie leaned forward in the seat. From the top of the hill, she saw a town nestled below. “That’s Baxter? I’m really here?”

“Yep. Where do you want me to drop you off?”

“How about the town square?”

Angie looked out the window at the cottage-style houses and the wide streets overhung with shade trees. The grass seemed so green. As they rode down Baxter Avenue, she marveled at the dogwood trees and all the colorful flowers. The town was even prettier than she thought it would be.

“You act like you never seen trees before,” Tully said.

A few seconds later, he pulled into a parking space in front of the courthouse. “There you go.”

Angie sat for a moment, her eyes fixed on the Baxter icon she had seen so many times on the news.

“Uh, I haven’t decided yet. Thanks for the lift.” Angie scooted out of the truck, grabbed her backpack, then looked over at Tully. “Any idea where Dennis Lawton lives?”

“You know what they say about curiosity…” He flashed a toothy grin. “Watch your step, Nine Lives.”

Angie shut the door. As Tully backed out and drove away, her eyes surveyed the grounds around the courthouse.: City Park looked the same as it had on TV.

She put on her leather jacket, then slipped on her backpack and strolled once around the square, stopping in front of the courthouse as the clock tower chimed seven. A raindrop landed on her head. Then another on her sleeve. She put her hands in her pockets and felt the bus ticket stub.

It had cost her everything she had to get here. What if it backfired?