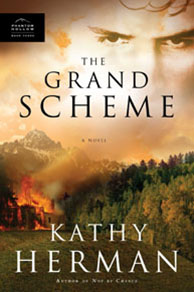 “The conclusion of Herman’s Phantom Hollow series is filled with excitement and danger. Heartfelt issues like dealing with forgiveness vs. paying for past actions will resonate. This author is truly gifted at magnifying life issues by using fictional characters and situations in a way that makes everything seem very real and relevant.”

“Kathy Herman rivets the reader with her trademark blend of family saga and suspense story in this third installment of the Phantom Hollow series. The characters leap three-dimensional from the page as Herman weaves a dark tangle of deceit, betrayal, and jealousy into a magnificent tapestry of redemption and forgiveness.”

—Jill Elizabeth Nelson, author of the To Catch a Thief series of romantic suspense

“A masterfully woven mystery involving flawed people struggling in a flawed world, where grace and forgiveness are major players in The Grand Scheme. Herman’s vivid characters and their conflicts kept me reading well into the night, in the end reminding me of the one hope of mankind—our Savior’s unconditional love.”

“Kathy Herman’s talent is in getting the reader immersed in her story. I stepped into Jewel’s Café on the first page. I cheered for the good guys and scratched my head as they tried to puzzle out the twists and turns of their summer calamities. This is the right book for those readers who like to be a part of lives of the characters on the pages.”