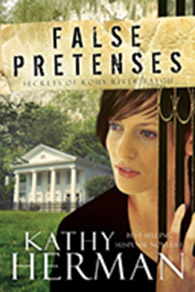 Zoe Broussard loves her life. She owns a thriving Cajun eatery in South Louisiana and is married to the love of her life. One day, out of the blue, she receives a series of anonymous notes that sends her life into a tail spin. Five simple words, “I know what you did.”

Unbeknownst to anyone, even Zoe’s husband, Pierce, she has a past—a past she had covered so well she never thought she would have to confront. How could anyone know what she did? Was he going to try to extort money from her? Is that what the notes were about?  If she paid once, what would stop him from coming back for more? And how would she hide the transactions from Pierce?

Zoe decides she will not be blackmailed and devises a plan that will remove the schemer’s leverage and stop any extortion attempt he might make. But she realizes in short order that she’s trapped in her own web of lies—and it’s going to cost her a lot more than money.

The story is based on Hebrews 4:13: “Nothing in all creation is hidden from God’s sight. Everything is uncovered and laid bare before the eyes of him to whom we must give account.” False Pretenses is about the importance of honesty and accountability, and how we inevitably reap what we sow.