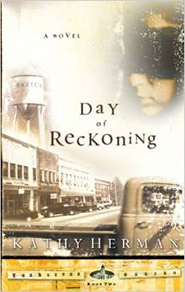 DAY OF RECKONING
The Baxter Series #2

The young man turned off his flashlight and slipped out the back door of the rundown, abandoned textile plant. He leaned against the rotting wood, his hands in his pockets, his breath turning to vapor in the February chill. He gazed up at the starry night and took mental inventory: His plan was ready, every detail factored in.

He swore from the beginning he’d never forgive G. R. Logan, not after what that ingrate did to his father and the others who worked here. G. R. barely got his hands on the reins of Logan Textile Industries before he shut down the Baxter plant, leaving 283 workers without jobs—just like that.

So what if his father had put in thirty years? So what if he had a wife and kids, and a mortgage, and was dependent on a pension? He was dispensable! Workers in Costa Rica could do the job for a fraction of the cost. All that mattered to G. R. was the almighty bottom line.

Well, it was time someone showed the rich and powerful Grant Randall Logan IV how it felt to be helplessly out of control, and to have what he valued most stolen from him.

The young man pulled his collar up around his ears, and cut through the icy wind toward a gravel road that angled through the woods and onto the main highway. He returned to his rusty pickup, hidden in a thicket just beyond the woods, and climbed into the front seat. He surveyed the area to be sure he hadn’t been seen. A grin spread across his face. People had no idea who they were dealing with.

As he pulled onto the main highway, the bitter cold seeped in through the rattling windows and nipped at his face and hands. His mind flashed back to the sound of weeping as he stood shivering at the cemetery, one arm around his mother, the other around his kid sister. Mr. Logan never called…never even sent a note.

Taylor Logan worked studiously at the computer in her upstairs bedroom, finishing Friday’s homework. The February wind howled woefully outside the stone, ivy-clad walls of the Logan mansion.

Behind her, a white sleigh bed bore the spilled contents of her backpack. Papers were collated in neat stacks along the window seat of a tri-window alcove that graced the other outside wall. In the corner next to her bed, the teenager’s school clothes were casually thrown over a powder blue slouch chair, her shoes pushed underneath.

Her phone rang. She finished typing a sentence and picked it up.

“Taylor, it’s Sherry. I thought you were gonna call.”

“I was. My dad already asked if my homework was done. Thought I’d get it out of the way first. You know how paranoid he gets. Heaven forbid I should get an A minus.”

“Are you in your room?

“He sounds happy. Speaking of happy…I talked to Rusty. He’s really excited about the Valentine’s dance.”

“Mitch, too. My dad’s pretending to hate him, but I know it’s an act. He doesn’t want his little girl going out with just anybody. Has to be from some socially acceptable family. Kind of a pain, if you ask me.””

“Well, you are quite a catch—from your long, blond hair to your ballet toes.” Sherry giggled. “I just thought of that.”

“Can we talk about something else?”

“I meant it as a compliment.”

“I don’t want to be different from anybody else at school.”

“Well, forget that. You can’t change who you are. Why would you want to? You look like a model. I mean, look at me: Five feet tall, short hair, no curves. Wanna trade…? Taylor…? Come on, I only meant—”

“I know what you meant. But other kids might not want me around if I’m rich and pretty and pampered.”

“I just don’t want them to resent me for it. I’m an ordinary junior, as insecure as any of them.”

“Yeah, I know. You nervous about going out with Mitch?”

“More for him than me. The only reason my dad’s letting me is because Mitch’s blood happens to be blue enough.”

“I’ll bet there’s more to it than that,” Sherry said. “All dad’s are protective, especially with girls.”

“Mine treats me like this long-awaited princess because I’m the only girl born in five generations of Logans.”

“Yeah, I’ll call you after my youth group gets back from the nursing home. Bye.”

Taylor turned off her computer and walked to the full-length mirror on the back of a closet door, where she tucked a white, silk blouse into her plaid, wool skirt. While she slipped on her favorite flats, Oliver rushed over and rubbed the side of her leg, leaving a trail of white fur on her pantyhose. She scratched her old friend under the chin and grabbed the roller brush, removing all traces of the cat’s loving gesture.

As the grandfather clock struck seven, Taylor hurried toward the winding staircase, where the aroma of something delicious had already made its way up to her senses.

Outside, under a dark veil of February night, a lone figure leaned against the wrought-iron fence, peeping through binoculars.