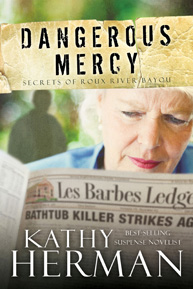 “Blessed are the merciful,
for they will be shown mercy.”
—Matthew 5:7

The intruder dragged Girard Darveau’s limp body over to the huge oval bathtub and hoisted him over the side, face up in the water, his graying hair undulating as he lay completely submerged.  All signs of arrogance disappeared from the man’s fearful eyes, which seemed to beg for mercy, despite his drug-induced paralysis.  How long would it take the high-and-mighty Darveau to drown?

Five minutes should be long enough. He set the heat timer, then dropped a thirsty towel onto the blue-and-yellow tile floor of the lavish bathroom suite. With his shoe he pushed it over the wet surface around the tub,then tossed the soggy towel into the corner.

He folded his arms across his chest and stared down at the man in the water. Could it be any more appropriate that Darveau was wearing an Italian silk suit and Gucci leather oxfords?  Wouldn’t this narcissist want Monsignor Robidoux to be impressed when he came to administer the Last Rites?

Surely people would stand up and cheer when word got out that this heartless bank CEO was dead.  How many home and business foreclosures had he sanctioned in the past few years? How many people on Roux River Bayou had lost everything while Girard Darveau lived in this opulent mansion, cavorting with gold-digging women half his age and feasting on rich food and twenty-year-old Scotch? No one would mourn Darveau’s passing, least of all his bitter ex-wife, or his son and daughter who would inherit his fortune.

It’s still murder. It’s wrong. He lifted his gaze to the waterfall that rained down a ten-foot wall of imported marble. No. What was wrong was allowing this ruthless control freak to steal the future of long-time patrons who helped to make him rich. Taking Darveau’s life was a community service.

He ambled around the spacious bathroom, running his gloved hand over the gold fixtures and polished marble made even more beautiful by the glow of natural light coming through the glass bricks and circular skylight. Darveau probably had more money tied up in this one room than his own parents had owed on their entire mortgage. Was it really necessary to call their note? Couldn’t Darveau have at least agreed to work with them until his dad found another job? Didn’t their loyalty to the bank all those years mean anything?

The timer dinged. He walked past the dolphin fountain in the center of the room to the bathtub. Darveau’s haunting stare seemed vacant now. No air bubbles.

That was easy.  He reached into the pocket of the leather satchel that contained the ten thousand dollars Darveau had given him from the safe and pulled out a can of spray paint. He shook it, then carefully wrote #1 on the tiled wall behind the Jacuzzi.

“You’re the first. But I’m just getting started.”

He put the spray paint back in the satchel, hung the strap on his shoulder, then walked out of the bathroom and down the back staircase to the kitchen. Who was that singing?

He crept over to the window and peeked out the curtains. A middle-aged Hispanic woman was coming up the back walk. The housekeeper!   Why was she here so soon? Would she notice the lock was broken?

He slipped around the corner into the dining room, his ear to the wall, his pulse racing.

The room was pin-drop still.

“Seňor Darveau, it is Carmela. Are you here?”

Not a sound. Then the soles of her shoes squeaked across the wood floor.

He waited several seconds—and then darted across the kitchen and out the back door, running into the shadows of the massive live oaks toward the fence at the far end of Darveau’s estate.

A scream came from the house just as he stumbled over a raised tree root and fell forward, landing on his elbows. He picked himself up and ran about half the distance of a football field, finally spotting the large hole in the fence, where he had sawed off the bars. He squeezed through the opening and kept running—in the direction of his truck, which was parked on a dirt road, just off Marchand Highway.

He laughed out loud. He did it! He pulled it off! Ten grand was pocket change to a wealthy man like Girard Darveau. But it would go a long way to help the people the guy had ruined.

He yanked the satchel higher on his shoulder, the thrill of victory pulsating through every fiber of his being. Would he feel this great after he scratched off #2 on his list?  If everything went according to plan, he wouldn’t have long to find out.

Adele Woodmore steadied herself with the hand-carved Black Forest cane she bought in Germany and hurried across the living room and into the coat closet. She left the door cracked and dabbed the perspiration on her cheeks and nose with her monogrammed handkerchief.

“Where are you, Addie?” the little voice replied.

“I’m over heeeere.” Adele smiled, wondering how she had survived all those years without knowing the joy of loving a child.

She heard the sound of little feet racing straight for the closet. The door slowly opened and Grace Broussard, looking like a Hummel figurine with her rosy cheeks and blond pigtails, peered inside.

“Peek-a-poo. I find you!” The two-year-old squealed and clapped her hands with delight.

“Goodness! You found me again.” Adele came out of the closet and straightened Grace’s pink-and-white sundress. “Addie needs to cool off. This July humidity gets to me. Why don’t we sit down and have our ginger cookies and milk?”

Adele met the child’s pleading gaze and kissed the three fingers she held up. “Why don’t we start with two and see if you’re still hungry? We don’t want to spoil your lunch.”

Adele chuckled. “Me too.  If I didn’t know better, I’d swear we were related.”

She held Grace’s tiny hand and walked out to the kitchen and pushed the button on the intercom.

“She’s in the laundry room, darlin’. When I talk into that silver gadget on the wall, Isabel can hear me and I can hear her.  It saves Addie from having to shout or go looking for her.”

Grace cocked her head, a smile dimpling her cheeks.

“Clear as mud, eh?” Adele brushed the little wisps of curls that framed the child’s face. “After we have our cookies, I’ll show you how it works.”

Isabel breezed through the door, her thick, dark hair falling over her shoulders and down to the middle of her back. “Ready to try those gingersnaps we made?”

Grace gave a nod and leaned forward on her elbows. “I wuv cookies.”

“Let me get you some milk to go with it.”

Adele got Grace situated in her booster chair while Isabel set the plate of cookies and two glasses of milk on the table.

“Gee,” Isabel winked at Grace.  “I wonder who that could be on a Monday morning?”

“It’s probably Murray,” Adele said. “Would you let him in, hon? I asked him to come paint that back bedroom a nice shade of pale blue. I’m not fond of lilac … Why are you smiling?”

“I was just wondering what you’re going to do when you run out of things for Murray to fix, paint, or remodel.”

Adele felt her face warm. “He needs the work. And I always have something that needs attention.  He’s the most reasonable handyman in Les Barbes.” Adele smiled in spite of herself. “Are you going to let him in or not?”

Isabel left to answer the door.

Half a minute later Murray Hamelin came into the kitchen, holding his blue cap in his hands, his carrot red hair showing a line where the hat had been. “Hello, Mrs. Woodmore. Little Miss Grace. I hope it’s okay that I brought Flynn Gillis from Haven House to help me move furniture so I can paint.”

“Of course it’s okay.” Adele held up the plate of cookies. “Better take a handful of these gingersnaps with you. Take some for Flynn.”

“I wuv cookies!” Grace set her glass down, a milk mustache painting her mouth.

“I knew that.” Murray took a generous handful of cookies off the plate, his boyish smile and red hair reminding her of Richie on Happy Days.

“Were you able to get the paint I picked out?” Adele asked.

“Sure was.  Should be enough to do the job and leave a little for touch ups later on.”

Touch ups. Adele smiled to herself. That back bedroom would likely never be used. “Will you finish today?”

“I should. But I’ll need to let it dry. I’d like to bring Flynn back tomorrow to help move the furniture back—if that’s okay with you.”

“You’re welcome, hon. Come and go as you need to.”

“Murray is nice.” Grace’s words were muffled by a mouth full of gingersnap.

“He is nice.” Adele glanced up at Isabel. “And he’s a fine handyman. It’s always good to have someone I can trust.”

“Murray seems nice enough,” Isabel said. “But you really don’t know anything about him.  Just because Father Vince discovered that Murray’s good with his hands is no guarantee that he’s honest.”

“Ma’am, with all due respect, a few months ago he was homeless. Don’t you wonder why? How do you even know that he’s who he says he is? Or that you can trust that Flynn fella he brought with him?  I saw him standing out in the driveway. His hair is longer than mine, and he looks tough as nails. He could be casing the place.”

Adele took a bite of cookie.  “You let me worry about the people I hire.  Murray’s been nothing but polite and efficient.  If he needs Flynn to help move furniture, who am I to second guess him? He deserves a chance to get back on his feet.”

“Maybe so.  Just be cautious. You’re so trusting and accepting of everyone.”

Adele fingered the gold cross around her neck. “I don’t necessarily trust everyone, hon. But I trust God. He brings people into my life for a reason.” She smiled at Grace. “I take them as they come.”

“Well, they’re coming in the front door.” Isabel arched her eyebrows. “Take a look at this Flynn character and see if you’re still comfortable letting him in your house.”

Adele heard the front door open and close again. A second later the two men stood at the kitchen door.

“Mrs. Woodmore, this is Flynn Gillis.” Murray nodded toward a man who reminded her of a young Willie Nelson.

“Nice to meet you,” Adele said.

“We’re going to get started now.” Murray tipped the bill of his cap. “We should be able to get the room painted this afternoon and have your furniture back in place tomorrow.”

“Good. I’ll be eager to see what a difference the pale blue makes.”

Murray and Flynn turned and walked down the hall.

“I’m not in the habit of judging a man by the length of his hair, hon. If Murray asked him over here, he trusts him. And I trust Murray.”

Adele mused. Of course she trusted Murray. Hadn’t he proven himself time and again? Yet something about Flynn was off-putting.  Was it his long hair?  His lack of manners? She couldn’t put her finger on it, but it was a moot point.  He was already here.