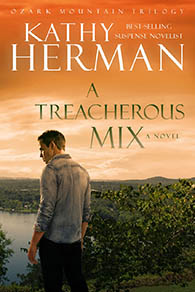 A Treacherous Mix is based on I John 1:5,6, “This is the message we have heard from him and declare to you: God is light; in him there is no darkness at all. If we claim to have fellowship with him and yet walk in the darkness, we lie and do not live out the truth.”

Twenty-four-year-old Hawk Cummings goes against everything he believes, and has a clandestine affair with Kennedy Taylor, a gorgeous woman he knows little about. When she disappears without a trace, her house completely empty, he’s ashamed, confused and embarrassed, afraid that he’s been played a fool. He owns his actions and asks God’s forgiveness, then confesses the affair to his steady girlfriend and his parents, knowing he’ll have to endure their deep disappointment and the consequences of his sin.

But Hawk soon finds out that nothing is as it seems, and he’s caught in a dark web of lies, deceit, and danger beyond anything he could have imagined—and consequences on so many levels he wonders if even God can stop the madness.

A Treacherous mix a poignant, gripping story that shows the pitfalls and consequences of moral compromise and will appeal to both genders of adults and mature teens. Warning: fasten your seatbelts. This is a rollercoaster ride you won’t soon forget!