I enjoy all kinds of birds, though my very favorite is the ruby-throated hummingbird. These tiny creatures fascinate and entertain me from March till September. For eighteen years, my late husband Paul and I lived in an area that drew large numbers of these birds—we had as many as 50 at one time before migration began. That afforded us a rare opportunity for watching the habits of these whirring miracles. 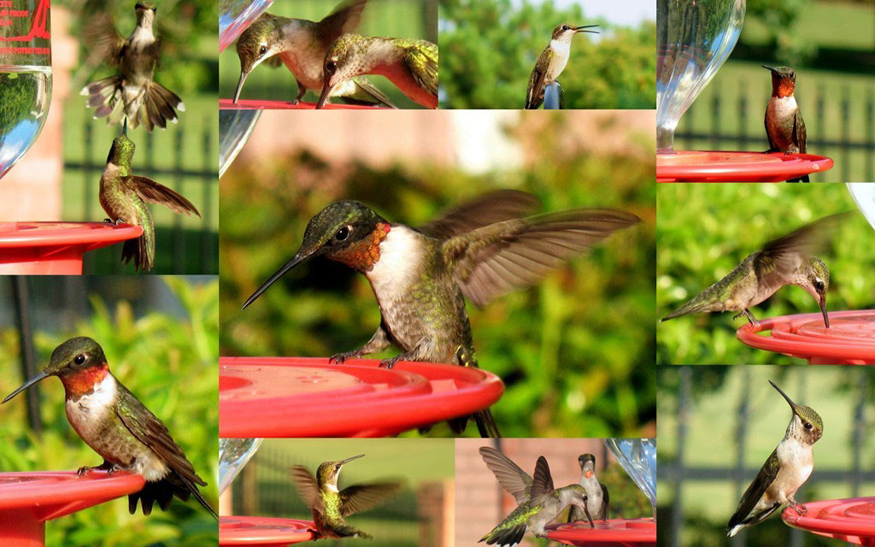 Some Interesting Facts About Hummingbirds

Only about two-dozen species of hummingbirds have been found in the United States; and of these, only the ruby-throated hummingbird nests east of the Mississippi. The first of them arrive in our part of Texas in March and begin leaving around the middle of September. Usually by the first week of October, they’ve all vanished-making their way south for their non-stop flight across the Gulf of Mexico (a minimum of 500 miles!).

The ruby-throated hummingbird is among the smallest of birds, weighing less than an ounce. They are astounding flyers that can move forward and backward as well as hover in flight. They have been clocked flying up to 60 mph!

The average ruby-throated hummingbird is 3-3-3/4 inches long, with a wingspan of 4-4-3/4 inches. The adult male has a red throat (called a gorget). Surprisingly, the red is not a pigmented color; its appearance is dependent upon the angle of light falling on the bird’s throat area. In dim or indirect light, the throat may appear black. Both genders and all ages share the iridescent green back. You’ll notice this when you view the pictures.

Males weigh about one-twelfth of an ounce, the equivalent of a penny; females are slightly heavier. Ruby-throated hummingbirds are polygamous; the male and female associate only for mating. During courtship, the female sits quietly on a perch while the male performs a pendulum dance, swinging in a wide semi-circle and buzzing loudly with each dip. It’s hilarious to watch. It’s almost as though the female thinks it’s a big yawn and is ignoring him.

She obviously doesn’t ignore him for long. The female lays two white eggs the size of sweet peas. The young hatch in 14 to 16 days and are altricial (born helpless).Young birds will fledge about 21 days after they hatch. When hummingbirds leave the nest, they are very close to full size!

Ruby-throated hummingbirds nest in trees, generally those at the edge of the woods or other opening, such as along a wooded stream. If you’re able to locate the tiny nest, which is the size of half an English walnut shell, you may well find nests in the same area in future years.

Hummingbirds are hard to spot in the wild and are best viewed at feeders. The males are fiercely territorial and there’s always a lot of bickering going on at the feeders. But over time I’ve come to the realization that the birds aren’t really hurting each other. I wonder if their skittish nature and their continual battle for dominance is God’s way of keeping these birds alert and quick so nothing can catch them.